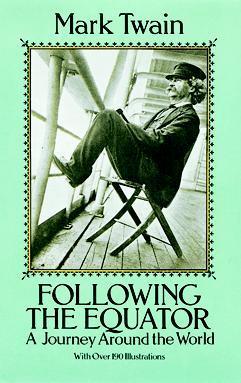 
This has been denied, but not disproven.


Afterward it was forbidden by law to "recruit" a native without his consent, and governmental agents were sent in all recruiting vessels to see that the law was obeyed--which they did, according to the recruiting people; and which they sometimes didn't, according to the missionaries. A man could be lawfully recruited for a three-years term of service; he could volunteer for another term if he so chose; when his time was up he could return to his island. And would also have the means to do it; for the government required the employer to put money in its hands for this purpose before the recruit was delivered to him.

Captain Wawn was a recruiting ship-master during many years. From his pleasant book one gets the idea that the recruiting business was quite popular with the islanders, as a rule. And yet that did not make the business wholly dull and uninteresting; for one finds rather frequent little breaks in the monotony of it--like this, for instance:.

The boats were in sight at some distance. The recruiter-boat had run into a small nook on the rocky coast, under a high bank, above which stood a solitary hut backed by dense forest. The government agent and mate in the second boat lay about yards to the westward. The mate's boat pulled quickly up, took her in tow, and presently brought her alongside, all her own crew being more or less hurt.

It seems the natives had called them into the place on pretence of friendship. A crowd gathered about the stern of the boat, and several fellows even got into her. All of a sudden our men were attacked with clubs and tomahawks. The recruiter escaped the first blows aimed at him, making play with his fists until he had an opportunity to draw his revolver.

Lihu, a Lifu boy, the recruiter's special attendant, was cut and pricked in various places, but nowhere seriously. Jack, an unlucky Tanna recruit, who had been engaged to act as boatman, received an arrow through his forearm, the head of which--apiece of bone seven or eight inches long--was still in the limb, protruding from both sides, when the boats returned. The recruiter himself would have got off scot-free had not an arrow pinned one of his fingers to the loom of the steering-oar just as they were getting off.

The fight had been short but sharp. The enemy lost two men, both shot dead. The truth is, Captain Wawn furnishes such a crowd of instances of fatal encounters between natives and French and English recruiting-crews for the French are in the business for the plantations of New Caledonia , that one is almost persuaded that recruiting is not thoroughly popular among the islanders; else why this bristling string of attacks and bloodcurdling slaughter?

The captain lays it all to "Exeter Hall influence. All Rights Reserved. Text Summary Table of Contents. Chapter 1.

Shows definite wear, and perhaps considerable marking on inside. Seller Inventory GRP More information about this seller Contact this seller 1. About this Item: Paperback. A readable copy of the book which may include some defects such as highlighting and notes. Cover and pages may be creased and show discolouration.

Pateo TV on The Previous Equator